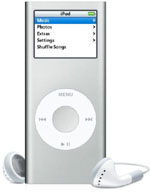 Incredible, eh? A monstrously long-winded price survey over on Reuters lists Rip-Off Britain down in a very respectable 33rd place when it comes to the global cost of iPod ownership.

Measuring the average price of the 4GB Nano, Australia’s Commonwealth Bank ranked pretty much every major country based on just how deep the punters have to dig to become part of the iCrowd.

The world’s cheapest Nano spot is the tech heaven of Hong Kong, where you can pick one up for $148. Or about £72.55 at today’s generous exchange rate.