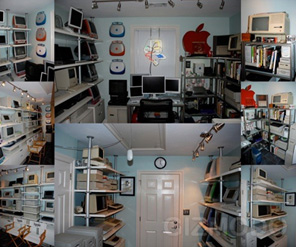 No, your eyes aren’t deceiving you, that is one sick, sick man who has collected over 100 Macs in the past five years. Look at them all. Disgraceful. Not a PC in sight. I think I might cry…

Gizmodo has interviewed the Mac fanboy about his obsessive collecting, ranging from an ancient Apple II+ to the latest MacBook Pro, almost every Mac model ever made, the collector, James Savage, is claiming.

I wonder if you opened Savage’s wardrobe, it would be full to the brim with black turtlenecks, stonewash jeans and New Balance trainers?