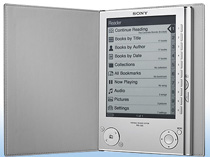 Manga and other books may be coming to the iPhone via downloadable services from network providers, but for those who don’t plan on forking out over £1,000 for one of Jobs’s little gizmos, Sony may just have the answer you’re looking for.

Sony first launched their Reader Digital Book a year ago this month, and are following it up with a second-gen version, the PRS-505, which will be on sale later this month. Costing $300 from Borders stores and Sony’s website, it will be available in silver and dark blue, able to store up to 160 average-sized e-books on its internal memory, otherwise the Memory Stick Duo or SD-able memory card slots will give you even more literary fodder for commuting. The major advantage to the PRS-505 over the predecessor is the USB connector, which will allow for direct transfer of documents, images and music files.

If you’re snappy and purchase a Reader shortly, you’ll get credit for 100 Connect Classics titles, which include tomes from Shakespeare, Austen and H.G. Wells. I’m holding out for the Babysitters’ Club, natch.