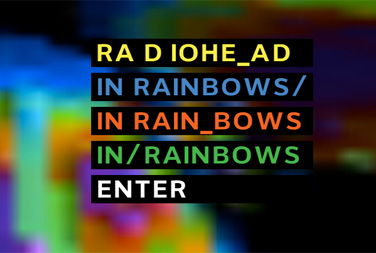 Just a quick reminder that Radiohead’s new album, In Rainbows, is going on sale tonight at midnight, GMT-time. You have to pre-order, and pay for, the album and then you’ll get sent an activation code after midnight, which when entered into the site, you can download the 48.4MB zip file containing the 10 tracks. Unfortunately they’re only recorded at 160KBPS, but are DRM-free, at least. Surprising that they’re only slighter better than iTunes’ bitrates, but I guess that’s meant to act as an incentive to buy the full £40 discbox.

Get to it, as not only is this one of the world’s most acclaimed band’s latest offering, but it’s a huge first for the music industry, selling an album by download and allowing consumers to choose the price-tag. And no, I’m not going to tell you how much I just paid for mine – as with politics and religion, you never discuss how much you pay for a Radiohead album!

Related posts
Radiohead ARE selling their new album In Rainbows online… and they want you to set the price
Opinion: Radiohead’s In Rainbows is their bravest decision yet
RadioheadLP7 update: Radiohead management say hoax, site says come back at 11pm tonight