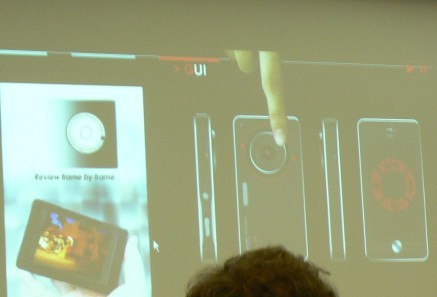 At the end of my visit to the LG Demo Centre, they showed a quick presentation of another concept phone, called NYX. It has the slogan ‘Display Only Card Phone’, although that could be a way of saying ‘not for sale concept device’ I guess.

Anyway, it’s interesting, with a three-inch touchscreen and five-megapixel camera, and a big jog-wheel on the back of the device, which is used for everything from zooming while taking photos to altering the volume when listening to music.

There’s also an ‘Advanced Shake Reduction Key’ for making your photos a bit less cack-handed. No idea when (or even if) it will launch, but I do have a blurry snapshot of the phone as it appeared on-screen – see above.

What with this and the Rolex concept phone, LG certainly has plenty of ideas for where its next Chocolate / Shine / Viewty is coming from.