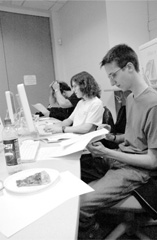 Imagine the geekiest thing you can think of. Bill Gates, watching an episode of X-Files in ASCII form? Multiply that by 97,524 times. Now you’re getting close to the spectacle that is…RAILS RUMBLE!

Basically it’s like an Olympics for geeks, with over 100 teams consisting of one to four developers, programmers and designers competing against one another by creating the best web application they can, in just 48 hours.

Teams weren’t allowed to prepare much for the competition, allowed to create only paper mockups before it started, and last Friday night the winners were chosen at the Ruby East conference keynote. The winning model was TastyPlanner, which shares recommended and healthy recipes with users, with CheckBook, an online checking account management site coming second.

Expect to see Facebook crash within the next few days as programmers excitedly upload their new applications hoping to be the next Where I’ve Been.