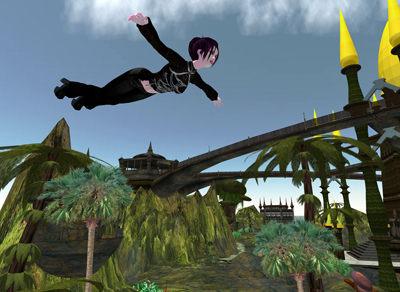 So, I spent two days soaking up presentations, viewing demos and talking to people at the Virtual Worlds Forum Europe conference in London last week. I’d label myself as an interested participant – I’m enthusiastic about the potential of virtual worlds – but nowhere near as steeped in their culture as most of the other attendees.

With that in mind, I’ve compiled a list of 20 trends and ideas that I picked up at the conference, which seem to be the most important and/or interesting ones affecting the development of virtual worlds right now. They’re entirely subjective, of course, but I think they’re all valid points. See what you think…

1. Shedloads of virtual worlds will be launched in 2008. Although the conference saw a lot of discussion about Second Life, Habbo Hotel, Club Penguin and other existing virtual worlds, there’s clearly more where they came from. There’s a number of virtual worlds in closed beta, or still effectively technological demos, but they all seem to be targeting next year for launch.

2. Teen-focused virtual worlds are huge. It’s my big takeaway from the conference: the sheer size and popularity of virtual worlds like Club Penguin, Webkinz and Habbo Hotel. Us geeks talk about Second Life like it’s the be-all and end-all of virtuality, but the kiddyworlds have way more active users. More importantly, a whole generation of children are growing up with the sense that virtual worlds are just a part of their lives – they don’t even refer to them as virtual worlds.

3. Brands still get it wrong. We saw the big hype around Second Life last year and this year, so you’d think that brands have had plenty of time to figure out what works when they engage with virtual worlds, and what doesn’t. But it seems many still think all they have to do is set up a shop in-world, and people will flock to it. They don’t. Armani was just one brand that came in for criticism on this score at the conference.

4. There’s a problem with communication. As a semi-outsider, one thing I noticed is that a lot of virtual worlds people are good at talking to other people within the industry, but struggle more to explain their worlds in language that normal consumers would understand. There’s still a bit too much jargon, and high-falutin’ language that makes virtual worlds sound eminently geeky. Interestingly, the speakers from companies who have to sell the benefits of virtuality to corporate customers were the most plain-speaking – perhaps because they’re used to pitching to cynical CEOs.

5. There will be big growth in corporate use of virtual worlds. Companies holding meetings in Second Life (or, indeed, their own dedicated worlds). Training for staff. These are all areas that are on the rise, and although it takes a fairly big leap of faith by a company to get its employees used to virtuality, it’s happening. Corporate use of virtual worlds answers one of the more common criticisms of these spaces – ‘What do you actually DO?’ Judging by the sessions at the conference, what you do is improve productivity and save money.

6. Virtual items will be a big moneyspinner. In many worlds, people buying clothes and items for their avatar is already big business, but this is set to become even more important – one of the key revenue streams for these virtual worlds. Interestingly, there’s disagreement about whether virtual items should cost less, more or the same as their real-world versions – a chap from There.com said some Levi’s clothing and Nike trainers are being sold for more in its virtual world than they cost in the real world.

7. Mobile is a bit of a wildcard. Okay, so mobile operators are getting involved in worlds like Second Life, for example Vodafone’s ‘Inside Out’ tool allowing people to make calls and texts from within Second Life. But there’s less of a clear idea about how (or indeed if) we’ll be interacting with these worlds from our handsets in the future. Several speakers pretty much said ‘it’s not worth it with that size screen and those controls’, but others seemed to take it for granted that mobile clients will be more popular in the future. Earlier today I reported on what appears to be a Second Life mobile app in Japan – hopefully we’ll see more developments on this front in the coming months and years.

8. Governments are waking up to virtual worlds. In many cases, this means waking up to the potential of extra tax revenue – a battle that’s only just in its initial skirmishes. But their interaction with virtual worlds could be more positive than that too, in terms of promoting training and collaboration, for example (see point five). A warning though: lawyers are also more clued in about virtuality, which means we’ll only see more real-world lawsuits based on virtual-world actions.

9. Is it an online game or a virtual world, or both? One of the most interesting trends highlighted at the conference was the blurring of the boundaries between virtual worlds and online games. Until now, they’ve usually been treated as two separate areas by those in the know (e.g. World of Warcraft versus Second Life), and confused by those who’ve never tried either. However, that’s changing now, as the crop of teen-focused virtual worlds include casual games as a key ingredient, while set-piece events within Second Life like the current CSI project take on several features of games. Meanwhile, even in pure online games, more players are effectively just hanging out and chatting as much as they’re slaughtering monsters.

10. China is getting into virtual worlds. And that means possibly hundreds of millions of new users. The presentation at the conference of Beijing’s Cyber Recreation District showed how much the government there is behind the idea, while a separate demo of new world HiPiHi showed that Chinese developers are looking to take Second Life on at its own game – with a potentially much huger audience base.

11. Interoperability is important. What’s that? It’s about how easy it is to take your avatar and even your digital assets between virtual worlds. At the moment, basically, you can’t. But as IBM’s presentation at the conference showed, there are moves afoot to change this, although they’ll have to negotiate tricksy issues of intellectual property and technical differences. I’m wondering if the generation growing up in Club Penguin will want to transfer out in this way as they hit adulthood. If so, there’s going to be a huge influx of penguins into Second Life in a few years ;o)

12. Advertising is another wild card. Everyone knows that brands are doing Stuff And Things in Second Life and rival worlds, but that’s more branding / marketing than pure advertising. One thing that wasn’t discussed at length last week was how traditional ads fit into these worlds. Do they just mimic the real world, with billboards and posters? Do they take new, more interactive forms? Or do people just not want advertising at all? Lots of speakers thought advertising will be a more important revenue stream in the future, but few predicted exactly how.

13. Virtual worlds need to become easier to use. People do love to bitch about Second Life’s relative unfriendliness, in terms of its interface, but there’s a wider issue here that to truly hit the mainstream, virtual worlds have to be more intuitive (i.e. not require a degree in geekery / FPS-honed mouse’n’keyboard muscles). At one point, someone even mentioned datagloves and headsets as a possible interface – I’m not sure if it needs to be quite that Lawnmower Man – but there’s a strong argument for more focus on controls and navigation.

14. Media streaming is more common, but strangely low-profile. Maybe this was the result of this bunch of speakers at this particular conference, but there wasn’t much talk last week about the challenges and opportunities of streaming music and video into virtual worlds. Yet it’s one of the things that’s most attractive once you have your own virtual space and people coming round to visit it – certainly on the music front, anyway. Record labels host live gigs, and broadcasters launch interactive islands, but they’re not saying much about licensing their content out to actual users for streaming within the worlds.

15. Social networking convergence. People are starting to think about how virtual worlds fit / don’t fit with the likes of Facebook and MySpace, in terms of users’ digital identities, and crossover features. There’s already some moves on this front, for example Second Life related Facebook applications, but there will be much more in the months ahead. Meanwhile, I picked up an undercurrent of debate around whether social networks could become rivals to virtual worlds for brands’ marketing budgets: if you’re a record label for example, do you put your money into branded Facebook applications or Second Life?

16. Which brands should set up their own virtual worlds? Examples are Mattel’s Barbie-themed world, MTV’s set of worlds based on popular shows, and LEGO’s efforts – all of which were talked about at the conference. But in his keynote, Lord Puttnam raised the notion that maybe this isn’t such a good idea, if these worlds are purely about selling more toys or products to children. I find it hard to get outraged about this stuff – after all, the idea of branded entertainment to flog toys has been going on since He-Man and Transformers in the 1980s. But it could become an issue.

17. Different approaches to graphical realism. You’ve got Habbo’s pixel-tastic isometric look, Second Life’s 3D animation, and a bunch of new worlds that graft actual photos onto avatars for an even more realistic look. Three separate approaches, with any amount of mixing and splicing between them too. It’s going to be hugely interesting to see which approaches prosper, and why.

18. Booze and fags. Heineken spoke at the conference about why they’re not jumping into Second Life yet, but there are plenty of other beer brands who’d like to. And what about cigarette firms, of whom little was said during the conference? Who sets the moral boundaries for in-world branding, how issues like age-legislation come into play (can you ban under-18 users from visiting an alcohol-themed zone?), and how will governments and advertising watchdogs have an impact? All questions that need to be answered in the nearish future.

19. Is Second Life going to stay a niche? That’s not an insult – everyone agrees it’s a hugely creative community of users, with plenty of legs. But as every new virtual world launches and learns from what Second Life has and hasn’t done well, will Linden Lab’s world be left behind – and with a tougher job to re-engineer itself to catch up, given its hardcore users? I’m certainly not suggesting they can’t do it – but it’s going to be one of the big issues in Second Life’s development from now on: how to woo more mainstream users (if that’s their goal) without alienating the existing creative community.

20. Nobody talks about sex. Well, they joke about dildoes on avatar heads, but nobody really talks about just how much money people are making from adult content within worlds like Second Life (obviously, it’s not a factor within many child-focused worlds). Is it big business, or just a minor element that’s worth sweeping under the carpet in order to attract more wholesome brands? Again, one to answer in the future.

All in all, that’s lots of questions – which I think is the sign of an interesting conference. What do you think though? All comments on trends I’ve missed / mis-stated are welcome.