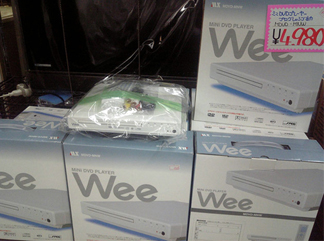 Now, on one hand you have the Wii, a games console which doesn’t play DVDs. On the other hand, you’ve got the Wee, a DVD player which doesn’t play games. If only someone would join the two together in holy matrimony and declare them Wii-Wee, all would be right in this universe.

And the boys at our brother-blog WiiWii would probably cream their pants.

UPDATE: Check out WiiWii’s exposé on the company behind Wee!

Related posts
Winamp 5.5 allows music to be streamed to your Nintendo Wii
YouTube Video of the Day – Pleasure a panda on the Wii
Modders hack the Nintendo Wii to play DVDs