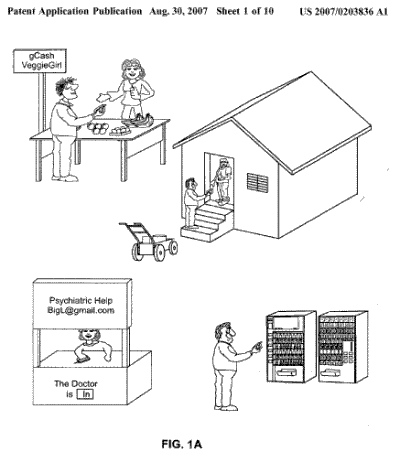 Y’know what the smart thing about Google’s corporate policy of allowing employees to work on their own projects? Any time information leaks out about something top-secret, the company can say ‘well, people work on lots of personal projects…’ and sidestep the speculation.

That’s what appears to be happening following reports of a patent filed by Google for Gpay, a potential text-message based payments system. In part, it’s the age-old ‘buy a can of coke from a vending machine using your phone’ idea, with added person-to-person payments to tip the greengrocer. I’m loving the accompanying illustrations on that score.

Google’s been throwing cold water over the speculation, but it’s now Internetweb Accepted Fact (IAF) that Gpay will be the killer app for the equally IAF GooglePhone, whenever it arrives. This, despite the fact that it’ll be competing with rival technologies from the likes of PayPal and Visa.

One thought on “Google gets into mobile payments with Gpay patent”