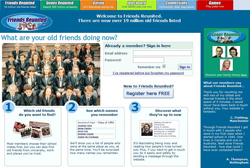 Remember Friends Reunited? Course you do (assuming you’re a Brit) – it’s the site you used to use to see what old schoolfriends were up to, in the days before MySpace and Facebook. Despite its sale to ITV for £120m in 2005, its thunder has since been stolen by those newer social networking sites.

But Friends Reunited is fighting back, starting with the introduction of video clips. They can now be uploaded to your profile on the site, ensuring more opportunity to show schoolmates just how attractive and dripping in wealth you are nowadays. The site has also beefed up its Photo Albums section, allowing slideshows and full-screen photos.

Although welcome for regular users, such features are par for the course on newer Web 2.0 social networks, so it’s hard to see it tempting people away from their carefully-tended Facebook profiles. The problem for Friends Reunited is that for many people, social networking is about keeping in touch with the friends you have NOW, not the ones you lost touch with years ago.