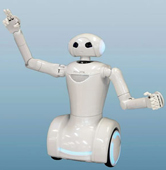 It’s not often you hear of a DJ throwing in the towel and becoming a receptionist, I can’t imagine tight skinny black jeans and scruffy, sweat-soaked tousled hair being generally accepted in offices.

But, that’s what DJ Robot has done. Created by Toyota, it’s performed at the 2005 Aichi World Expo with several of Toyota’s other musical robots, but since then has been aiming on improving its ability to interact with the human species. At the end of August, DJ Robot will be working the nine to five grind alongside human receptionists at the Toyota Kaikan Exhibition Hall at Toyota’s company headquarters.

Wonder if he’ll keep the DJ-tastic moniker, or change his name by deed poll to something more suitable, such as ‘I’m-only-being-paid-$9-an-hour-so-will-be-as-rude-as-I-want-to-you Robot’.