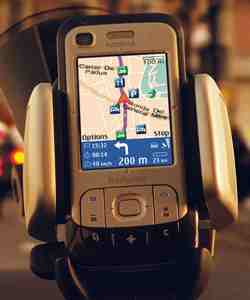 Drivers are abandoning A-Z maps in their droves in favour of satnav systems, according to new sales figures from industry analyst Canalys. They claim that in the second quarter of 2007 alone, 7.4 million satnav devices were shipped – more than double the number in the same period last year.

Canalys also reckons that Garmin has nicked top spot in terms of market share, relegating former top dog TomTom to second place. However, the great big scary elephant on the horizon is Nokia – which is currently lurking just outside the top five in that chart. Well, mobile phones in general really: the ones with GPS inside anyway.

Handsets like Nokia’s 6111 (pictured) are being sold as navigation systems in their own right, and there’ll only be more as time goes by. However, for the moment the satnav firms are rolling in money – and can point to the battery-sapping issues of mobile navigation as one reason to stick with standalone devices for the moment.

One thought on “Satnav business booming, but faces mobile challenge”