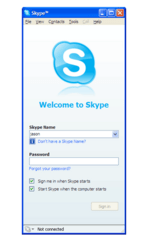 Okay, it’s not like Bill Gates hired a crack team of ninjas to assault Skype’s secret server bunker for some nefarious purpose. Although I haven’t ruled it out.

No, it seems last week’s Skype outage was caused by a huge synchronised reboot after the latest Windows Update patch. However, after Skype explained this on its official blog, it was quickly written up as ‘Skype blames Microsoft for crash’, forcing Skype to publish another blog post stressing that’s a barefaced lie misinterpretation:

“We don’t blame anyone but ourselves. The Microsoft Update patches were merely a catalyst a trigger – for a series of events that led to the disruption of Skype, not the root cause of it. And Microsoft has been very helpful and supportive throughout.”

Apparently the bug has been “squashed” now though. Probably by those ninjas.