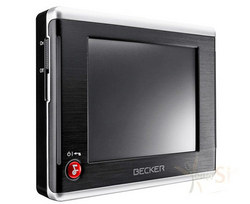 No sooner have I finished writing a post about how satnav devices are booming, than info on Becker’s new model turns up. It’s apparently called the Traffic Assist 7927, and is due to be officially unveiled at the IFA show next week.

According to NaviGadget, it’ll have a 3.5-inch screen, a SiRF Star III GPS receiver chip, and an RDS/TMC receiver for live traffic data. There’ll be 128MB of internal memory, plus a 2GB memory card full of European maps.

To be honest, it looks a lot like other Becker satnav devices I’ve seen, but I guess these things are about iterative improvement rather than whiz-bang revolutions. Anyway, there’ll be more details next week when it’s officially launched at the show.