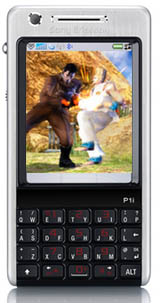 So far Sony’s attached its Cyber-shot and Walkman brands to its Sony Ericsson mobiles with great success – so surely a PlayStation-badged gaming phone is on the way too?

The blog-o-sphere’s favourite question was put, once again, to Sony Ericsson’s gaming boss, Peter Ahnegard, who told Pocket Gamer that we might see a PlayStation gaming phone by Christmas – although “exactly which Christmas I can’t confirm”. Misery guts.

He did, however say that a PlayStation phone is “obviously something that we’re looking at” – but presumably the disastrous reception that greeted Nokia’s N-GAGE and the domination of Nintendo’s DS and Sony’s PSP is something they’re also keeping an eye on.

There’s also the fact that the vast majority of mobile games are RUBBISH, and that Sony’s PSP is getting a right kicking from the DS in the portable gaming market – should Sony really confuse matters further by releasing a PlayStation phone?

Related posts
World of Warcraft definitely, positively, 100% NOT coming to consoles. Ever
PlayTV – Sony’s PVR and digital TV tuner for PS3
SingStar: the first essential PS3 game thanks to downloads and social networking