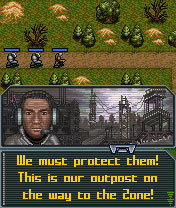 If you’re bored of the basic puzzles games on your handset, how about something with a little more depth? That’s what you get with radioactive strategy game Shadow Zone from Ojom.

It’s a step-by-step strategy game set in a world decimated by thermo-nuclear fallout and involving two sets of warring factions locked in combat. Collect and trade in rare artefacts, grapple with mutated creatures and travel through a forbidden zone to reach its epicentre – The Shelter – and prevent a global disaster.

Marc Buße, Channel Manager, of Ojom GmbH, said: “Shadow Zone is a game that allows players to plot their moves before they attack their enemies. This type of battlefield strategy game is a step in a new direction for Ojom, but we hope that fans of this genre will also appreciate the compelling storyline and quest that underpin the action.”

Shadow Zone is available now on all main Java-enabled handsets.