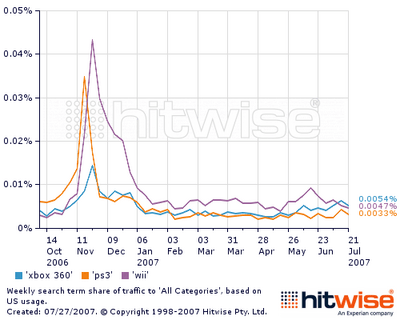 And no, cynics, it’s not because millions of gamers are searching for ‘my Xbox 360 stopped working what do I do?’. Tsk.

According to internet monitoring firm Hitwise, the Xbox 360 has overtaken the Wii for US internet searches for the first time since the latter console’s launch last November. And searches like ‘xbox 360 problems’ and ‘xbox 360 repair’ are way down the list of terms that’s put Microsoft’s console back on top.

So why are people suddenly going Xbox 360 mad on the search engines? Hitwise’s Bill Tancer suggests it’s a combination of “hype for new games, rumours of a price drop and no doubt some queries about the recent problems”. He also reckons that the search upswing could soon be reflected in sales…