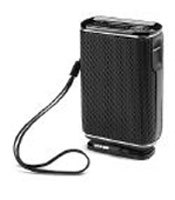 All eyes were on Nokia yesterday for its Go Play launch event. One thing mentioned was a range of third-party accessories for Nokia’s music phones. Well, the first of those has now been launched – the Altec Lansing Nobi portable speaker.

A comical name, but a serious use – delivering stereo sound from the new Nokia XpressMusic series of MP3-enabled mobile phones. Small enough to fit in a pocket, bag or backpack, the Nobi portable speaker system weighs just 10oz. Connect to a Nokia XpressMusic phone (or other device) via its 2.5mm connector and you get what’s promised to be a ‘rich, clear 360-degree sound’.

Powered by 2x AAA batteries (which offer 24 hours of sound), it should be available in October. Price to be confirmed.