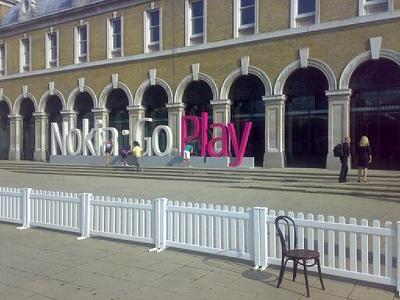 Nokia is hosting an event today called Go Play, which looks set to see the debut of the company’s rumoured digital music store, which would be a direct iTunes competitor. Its new N-Gage mobile games platform (as opposed to the old N-Gage games phones) is also set to feature.

I’m liveblogging the event in full: see below for the latest couple of entries, and click on the link below for the full liveblog in chronological order.

11.37: Oh, just quickly, the Nokia Music Store will be selling DRM-protected music, which seemingly goes against the trend elsewhere (iTunes Plus, Amazon’s upcoming music service. And on pricing: oh, “You’ll have to wait until you make your first purchase”. Riiiight.

11.26: To recap quickly: Nokia has announced Nokia Music Store, its iTunes rival. It’s also revealed that its new N-Gage games platform will launch in November, and has unveiled a music-focused N95 handset, and the new 8GB N81 music phone.

11.25: My laptop battery is about to die, just in time for the Q&A. Key questions though: will the Nokia Music Store be DRM-free, and will there be variable pricing or one £0.80 per track fee across the board? Why will this persuade people to buy legal digital tracks rather than download illegal ones, when other music stores haven’t? And who booked Maroon 5, hmm?

THE CHRONOLOGICAL LIVEBLOG KICKS OFF HERE

9.54: Right, all set for kickoff – I’m sat in Old Billingsgate Market ready for action. Also, they’re playing the Black Crowes ‘Shake Your Moneymaker’ album in full over the PA, making them an early front-runner in the ‘which mystery ‘Grammy-nominated artist’ is playing tonight’s Go Play party?’ stakes. This had better not be true, seeing as I’m a.) the planet’s hugest Crowes fan, and b.) unable to go tonight.

10.05: Still waiting, and they’re still playing them there Crowes. In the absence of the press conference kicking off, here’s my other tips for tonight’s headliners: Prince. Or some obscure Finnish band who we’ve never heard of, but who were nominated for the Best Ringtone Grammy last year. There is a Best Ringtone Grammy, right?

10.08: Right, portentous intro. “In the beginning, there was a screen…” and they’ve already got archive footage of Gandhi and Martin Luther King in. It’s what they would’ve wanted.

10.10: A quick glimpse of the all-new N-Gage FIFA running on a mobile. Forget all those civil rights activists, THIS IS WHERE IT’S AT, BABY! And now Kari Tuutti from Nokia is onstage to introduce the event, which is being tagged ‘Welcome to the 4th screen’.

10.15: First up is Nokia head honcho Olli-Pekka Kallasvuo, who’ll give the big picture. He’s starting by quoting George Lucas, something about Ewoks (okay, I didn’t quite catch it). But the theme today seems to be Nokia trying to evolve and redefine itself, and pitch itself as the leader in convergent worlds. First mention of convergence today: who had seven minutes 32 seconds?

10.20: Olli-Pekka’s talking about stuff like blogging, photo-sharing and webcasting, so Web 2.0 is clearly a big factor in the company’s thinking. Interesting that on one side Nokia is talking up this stuff, and on the other operators like 3 UK are doing the same thing, with their X-Series tariff. “We have begun expanding our business beyond devices to include services and software,” he says. “It’s a giant leap…”

10.21: Ooh: “We’re transforming Nokia into an internet-driven experiences company”. Which is kinda slogany, but an interesting insight nonetheless into how Nokia sees itself. I might ask when they’re going to get into pr0n during the Q&A session…

10.25: Promo video: “Soon Nokia devices will allow you to use touch to control the screen.” IPHONEIPHONEIPHONEIPHONE. Sorry, had to get that out of my system. The video also made great play of the Nokia Nseries handsets’ music player, complete with scroll-wheel type functionality to navigate through artists and albums. Wasn’t there an MP3 player that did that, once?

10.27: Olli-Pekka: “I see the future in three words: ‘Free The Internet’. As I said, similar thinking to 3’s X-Series. Oh, now he’s onto a golf anecdote, about using his N95 to check the weather during a rainy round. Does the N95’s battery last for a whole golf round?

10.30: Apparently the market for ‘converged devices’ will be 120 million units this year, up from 80 million last year. I assume that means smartphones. Also, Olli-Pekka just confirmed there’ll be some gaming announcements this morning – hello all-new N-Gage – and also music.

10.32: Now Kai Oistamo, boss of Nokia’s mobile phones division, is onstage and talking about changes in the music industry (physical distribution moving to digital distribution, new schemes like Prince’s new album being given away with the Mail On Sunday,

10.36: Kai is talking about research on what people want from a music phone: sound quality, battery life, enough storage, easy to transfer songs back and forth to your PC, and it has to be the right price. “We cannot expect any compromises over standalone music players,” he says. “Consumers will not accept that. We have to offer something that is more than the standalone music players.”

10.41: More on what music phones need. They have to be easy to use out of the box, in terms of music transfer, management and playback. And design-wise, “the product has to speak what it is”.

10.45: Now we’re on the XpressMusic range of phones, which are getting some new additions. First up: the Nokia 5310 XpressMusic. It looks quite a lot like a Sony Ericsson Walkman phone, actually, except with neon red bits (the first nu-rave phone!) and super-thin. 18 hours of music playback, a 3.5mm headphone jack (this is good) and dedicated music keys. Plus a two-megapixel camera. It’ll be out before Christmas for around 225 euros.

10.46: Nokia 5610 XpressMusic now, which is a slider phone with a whopping 22 hours of music playback battery life. 3.2 megapixel camera with flash, and it’s a 3G phone (including video calls). Also out by Christmas for around 300 euros unsubsidised.

10.47: Lumme. Nokia is teaming up with Philips, JBL and Altec Lansing to make XpressMusic branded accessories (speaker docks and so on). As far as I know, it’s the first time Nokia has outsourced these kinnd of accessories.

10.50: Okay, here’s the big reveal. Olli-Pekka is back, and teasing us a bit with more big picture stuff, as well as info on the Nokia Maps application (you might know it from the N95).

10.55: Right, Nokia’s multimedia supremo Anssi Vanjoki is onstage now, to tell us about the big news (hopefully). And… Oh, hang on, he’s introducing a ‘new brand for Nokia’s internet services’. It’s: Ovi? That’s right, Ovi. But it does include the Nokia Music Store and N-Gage. “It’s an open door to your favourite web communities, and to Nokia’s intimate services…” They ARE getting into pr0n!

10.56: Oh, sorry, I think that’s ‘ovi’ in all lowercase. Branding consultants will kill me for getting that wrong. But it’s going to cover all Nokia’s services and applications, from mapping and gaming through to that music store. The idea is to connect all your Web 2.0 services together. I promise, I won’t mention 3’s X-Series again after this. Oh, and ‘ovi’ is a Finnish word meaning ‘the door’. ovi is launching by Christmas in some countries, and then rolling out elsewhere next year.

10.58: Right, the good stuff. N-Gage (complete with a nice new bubble-font logo). It looks more cuddly than the original N-Gage logo. Branding consultants will pay me thousands for this kind of consumer insight, really they will.

11.05: We’re seeing some of the handsets that’ll run the new N-Gage platform. Basically anything that’s come out recently with an ‘N’ in front of it (N95, N73, N91 etc). A big selling point is that you won’t need to buy a new phone to play new N-Gage games. Plus, there’ll be sophisticated Xbox Live Arcade style community features tied in. Games can be bought through the phone or downloaded through a PC and sideloaded (which is better for data charges.

11.06: Games will cost 6-10 euros, with rental options and free demos. That’s new information. The featured titles are FIFA 08, The Sims 2 Pets (not The Sims 2?) and Brothers In Arms. Snakes will also feature with a game called Snakes Subsonic. And mark my words, fish ’em up Creatures Of The Deep could be the sleeper hit. And it’s launching in… NOVEMBER. That’s not September as promised by Nokia earlier this year, but it’s pre-Christmas.

11.10: Onto music now. “Mobile music stores today are personal computer oriented, and mobiles are satellite devices to that,” says Anssi. So, Nokia Music…

11.15: As predicted, Nokia has announced its iTunes rival. The new store is called Nokia Music Store, and it will launch by Christmas in Europe. Nokia claimed that it’s the first music store to be truly online and mobile, although all the mobile operators offering their own dual-download stores might disagree strongly. You’ll be able to tag songs on your phone, for download via PC when you get home, which will get around data charges. And later on, Nokia plans to launch a new PC music client (i.e. a rival to the actual iTunes app, as opposed to the iTunes Store), although this won’t be available at the launch of the Nokia Music Store.

11.17: Ah, Maroon 5 are on-screen. And they’re the stars tonight. Phew, they’re rubbish. More importantly, there’s a new music-focused N95 handset coming out, which looks purdy. And they’ve announced the N81, an 8GB music phone, which will tie in with the Nokia Music Store.

11.20: There’s a really cheesy spoof boy-band theme song for the N81, like New Kids On The Block, complete with K-Fed-quality rapping. A round of applause for the sense of humour. The N81 will also be one of the lead N-Gage games phones, including gaming in landscape mode, with dedicated gaming buttons.