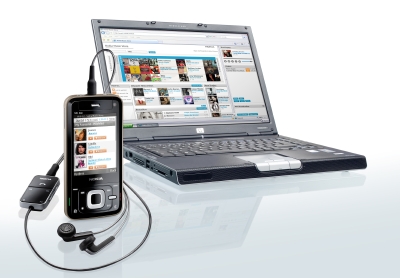 At today’s Go Play event, Nokia announced its new Nokia Music Store service (see the earlier story and liveblog for full details). In the afternoon, I got hands on with the web and mobile versions, to see how they’re shaping up.

First, some factual info that didn’t come out in the earlier press conference:

– The DRM-protected tracks will be WMA files encoded at 192kbps. Initially, it’s using Microsoft’s old Windows Media DRM, but in the future, there’s scope to switch to the newer PlayReady system (you might remember, a couple of weeks ago, Nokia and Microsoft signed a deal to work together on the latter).

– All four major record labels have signed up to supply songs for the service: EMI, Sony BMG, Universal Music Group and Warner Music Group. There’ll also be tunes from many many independent labels.

– Pricing hasn’t been set yet for the UK, but in Europe it’s one euro per track, and ten euros per album. Which translates to about 67p per track and £6.70 per album – although I wouldn’t be surprised to see that creep nearer to iTunes’ 79p / £7.99 level when it launches here.

– Both the PC and mobile Nokia Music Stores are web-based, NOT downloadable applications. More worryingly, at launch the PC store will only work on Internet Explorer 6. Bad news for the near 15% of us who use Firefox in other words. Oh, and Mac users too, obviously.

– Besides individual downloads, there’ll be an unlimited streaming service for PC users, which you’ll pay 10 euros for a monthly subscription, which will allow as much track streaming as you like, all done through the Nokia Music Store’s website. It’ll work for promotional playlists too – I saw a celebrity playlist compiled by Rihanna, with one-click streaming of all its songs if you have a streaming subscription. However, streaming won’t be available over mobile, at least not initially.

– The demo I saw involved having your own account with a certain amount of credit, indicating that you’ll top it up almost like a pay-as-you-go phone, rather than the iTunes model of charging your card every time you make a purchase. However, it’s unclear whether that model will also be supported.

– Local music is going to be a big deal for the Nokia Music Store – all the executives I spoke to today mentioned this aspect as being important, particularly in Europe. But like iTunes, you’ll still be locked into your country’s local store, due to licensing issues (e.g. Band X might be on Label Y in the UK, but Label Z in France).

And now some personal reaction to the store, based on what I saw / used today:

– The Nokia Music Store website is slick and well-designed. Finding your way around is easy, and each song has prominently placed buttons for streaming / downloading / wishlisting / sampling. It doesn’t feel too cluttered.

– The notion of ‘tagging’ songs on your phone for download next time you’re at your PC is excellent, and works really well. I can imagine myself filling dead time on the go by cueing up songs, and then grabbing them when you get home. Synchronisation is automatic too, so if you download a song over the air to your phone, next time you connect to your PC, it’ll pop up in your library too.

– I’d like to see more Last.fm style personalisation, given the way Nokia’s execs are shouting about Web 2.0. Initially, the Nokia Music Store will offer Amazon-style recommendations in a ‘people who liked this also liked…’ way, but there’s no apparent sign of, say, being able to share playlists with friends, or interact in other ways. Hopefully this’ll be coming later, but it would have been a good way for Nokia to differentiate its Music Store from the iTunes Store.

– The DRM… well, it’s a bit of a disappointment to hear that Nokia isn’t following the likes of iTunes, eMusic and Amazon (well, Amazon hasn’t launched yet, but…) in offering DRM-free tracks from the start. Maybe the record labels are nervous about doing this in a mobile context, what with those pesky kids Bluetoothing stuff to each other. In fact, that’s probably a very good reason to hold off on DRM-free downloads for the moment if you’re Nokia, but as a consumer that’s still a bit annoying.

And an initial verdict:

– Nokia Music Store might not be selling DRM-free songs, but other stores will be, often as pure MP3 files. So personally, I’d still be minded to buy from those, since I’ll be able to play those MP3 files on my Nseries handset, with none of Microsoft’s DRM getting in the way of doing other stuff with them too.

– The mobile aspects – discovery and tagging – are very slick indeed, and will certainly appeal to anyone who doesn’t mind the DRM aspects to the store. The streaming subscription seems nice, but it’s not as fully featured as Last.fm (e.g. personalised stations that learn your tastes).

– The big question is whether the Nokia Music Store’s features will persuade mobile users to buy digital music, as opposed to just sideloading their CDs. The mobile features could be the tipping point here, but it’s too early to say for sure. If nothing else, the first iteration of the Nokia Music Store is a solid entry into the digital music market, with scope for new features to be added in the future.