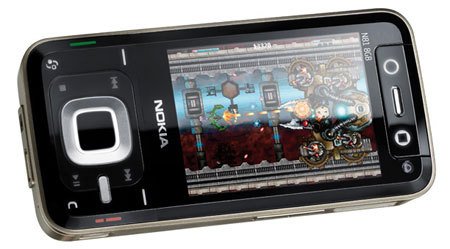 We’re liveblogging the Nokia Go Play event right now – and if you want to know the latest news from Nokia’s big launch event check here. If you missed the morning’s news, the company has launched a range of entertainment-based handsets, these being the N81, N81 8GB, N95 8GB, 5310 XpressMusic and Nokia 5610 XpressMusic.

The Nokia N81 and Nokia N81 8GB feature dedicated music and gaming keys, 3.5 mm headphone connector and 3G and WLAN connectivity. Externally, there’s a polished surface and keys that light up when you activate them. Both are configured to find, buy, manage and play music and games purchased from the Nokia Music Store and N-Gage games service. The estimated retail price of the Nokia N81 is 360 Euros, while the Nokia N81 8GB is expected to retail for 430 Euros. Both should ship in the final quarter of the year.

The Nokia N95 8GB is a boost of spec on the original, using the original’s selling points, including a 5 megapixel camera, built-in A-GPS, WLAN, HSDPA and the 2-way slide, but now with 8GB of storage and a new luminous 2.8-inch QVGA display. It should ship in the fourth quarter of 2007 with an estimated retail price of 560 Euros.

The aluminium Nokia 5310 XpressMusic is just 9.9mm thick and weighs less than 71g, with a capacity of 4GB via microSD card. It’s also got dedicated music keys and a 2-inch VGA screen. Another one available in the final quarter of 2007 at 225 Euros. Finally, the Nokia 5610 XpressMusic features a ‘Music Slider’ key for quick access to your tunes. In a black and aluminium finish, the handset has a 2.2-inch screen, 3.2 megapixel camera, up to 22 hours of music playback and a capacity of 4GB on microSD card. It’s also 3G to boost those downloads. 300 Euros when it ships in that fourth quarter.

For more on the Nokia Go Play event go here.