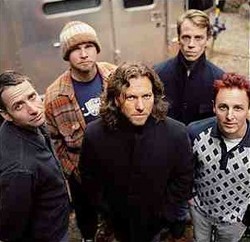 You might remember our story yesterday about Pearl Jam complaining that their anti George Bush comments were censored from a webcast of last weekend’s Lollapalooza festival in the US. Well, AT&T, who hosted the webcast, has now denied direct responsibility.

“The editing of the Pearl Jam performance on Sunday night was not intended, but rather a mistake by a webcast vendor and contrary to our policy,” says the company’s statement. “We have policies in place with respect to editing excessive profanity, but AT&T does not edit or censor performances… We regret the mistake and are trying to work with the band to post the song in its entirety.”

It sounds a bit rum – why would a webcast provider take it upon themselves to censor people being nasty about George Bush? Still, all’s well that ends well. If we have to have censorship on festival webcasts, at least make it involve chopping the mid-set indulgences where bands roll out old B-sides “for the fans”.