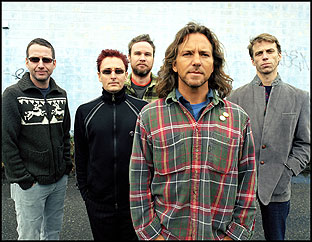 There’s a row rumbling over in the US, where Pearl Jam recently headlined the Lollapalooza festival, which was webcast by telco AT&T on its Blue Room site. The band are claiming their performance was censored – specifically the bits where they changed their lyrics to snipe at George Bush.

“This, of course, troubles us as artists but also as citizens concerned with the issue of censorship and the increasingly consolidated control of the media,” says a statement on Pearl Jam’s website. “What happened to us this weekend was a wake up call, and it’s about something much bigger than the censorship of a rock band.”

The band plans to post the uncensored footage on their website “soon”, and have asked fans to submit any more examples of AT&T censoring artists’ political comments.