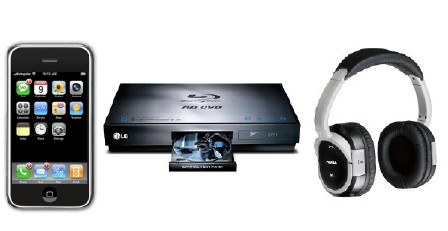 By definition, technology is always evolving faster than any expert can keep up with it, no matter how much of a boffin they are. But right now, in 2007, the pace of change feels more rapid than ever.

Around us, consumer technology products are evolving, converging and spawning new gadgets like mad. Simply keeping up with the main developments is an exhausting (not to mention expensive) process. Still, that doesn’t stop us trying. In recent weeks, I’ve been analysing the ten consumer technology trends that I think are going to be most interesting in the second half of 2007.

1: Telly 2.0
Right now, online TV is still a relatively niche activity in terms of who’s actually watching services like Joost, Babelgum and VeohTV. But don’t be fooled into thinking this is just entertainment for geeks – the big broadcasters are all making preparations to launch into the Telly 2.0 world, either in partnership with these startups, or with their own initiatives. Read more

2: Green gadgets
What, like that camouflage-coloured new Xbox 360? No. Consumer tech firms are finally taking responsibility for the effect their products have on the environment, and us consumers are being encouraged to do the same. So whether it’s using less harmful elements in their gadgets, or making it easier for us to dispose of them in an eco-friendly way, green gadgets is an increasingly important area. Read more

3: Blu-ray and HD DVD convergence
Any idea which format out of Blu-ray and HD DVD is winning the home entertainment war? Join the club. BOTH sides claim they’re on top, but the fact is that most consumers are keeping their wallets in their pockets until it’s clear which is telling the truth. For that reason, attempts to merge the two – either in universal players or dual-format discs – will be high-profile in the coming months. Read more

4: Virtual Reality
Second Life isn’t the only virtual world in town any more – it’s now got a bunch of competitors all promising users a slick and accessible virtual experience. Meanwhile, Sony is ready to weigh into the market with its Home world for PS3. The second half of 2007 will show which worlds are likely to survive and prosper, and what role brands are likely to play within them. Read more

5: Touchscreens
It’s only a couple of weeks since Americans got their thumbs on Apple’s iPhone, but it’s already being talked of as a turning point for the mobile industry – the point where tactile user interfaces proved their worth. But it’s not just mobile phones that are getting touchy in 2007 – digital cameras, personal media players and smart tables are all here already, with more on the way. Read more

6: Mobile social networking
As the world and its aunt ditches MySpace for Facebook (literally – my aunt just added me as a Facebook friend), all the big social networking sites are casting their eyes towards mobile users. MySpace, Bebo and Facebook have all got mobile sites, albeit with different strategies. Meanwhile, there’s a host of startups looking to beat them to the punch with their own blends of profiles, photos and messaging. Read more

7: Lifecasting
Some American bloke called Justin has already made lifecasting big news, by streaming his life round-the-clock. However, plenty more people will be at it soon, broadcasting live from their desktops via easy-to-use Web 2.0 interfaces. It’s the next step on from uploading pre-recorded videos to YouTube, and once it’s about more than geeky white males showing their working routine, it’ll take off. Read more

8: Bluetooth audio
In not too long, people will look back fondly on the days when we needed wires to connect our headphones with our music-playing devices. Bluetooth audio is an increasingly standard feature in MP3 players and mobile phones, while standalone speakers and adapters for home hi-fis are making it easier to run your home music from a handheld device without needing to plug it in. Read more

9: DRM-free music
Why won’t your iTunes downloads play on your mobile phone? DRM. Why won’t your mobile downloads play on your iPod? DRM. What are music fans sick of? You guessed it. Yet there’s a big trend within the music industry towards selling DRM-free songs, in the hope that the sales increase will outweigh the feared explosion in file-sharing. DRM-free music is good news for music fans, it just remains to be seen what the ramifications are for artists and record labels. Read more

10: Wi-Fi personal media players
Soon, when you buy a high-end PMP, you’ll expect it to have Wi-Fi. The question is what you’ll do with it. Two uses immediately present themselves – downloading and/or streaming music via a Wi-Fi hotspot, and sharing songs or videos with friends, assuming their device can talk to your device. Wi-Fi PMPs throw up a host of issues for rights-owners on the latter front though – the next six months will hopefully see some solutions. Read more