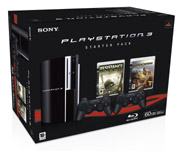 From July 18, the only way you’ll be able to buy a PlayStation3 in the UK is as part of a new £425 bundle, including two games and an extra controller.

This is at least a better deal than the launch scheme, but with most UK retailers currently discounting a standalone PS3 to £399 and chucking in a free game themselves to try and shift the things, this new pack means you now won’t have that option any more. Buying a PS3 will be more expensive after next week.

Sony’s David Reeves, President of Sony Computer Entertainment Europe reckons “The exceptional value of the new Starter Pack will bring the excitement of PlayStation gaming to a much wider audience,” adding that PS3 has “stellar line-up” of games on the way.