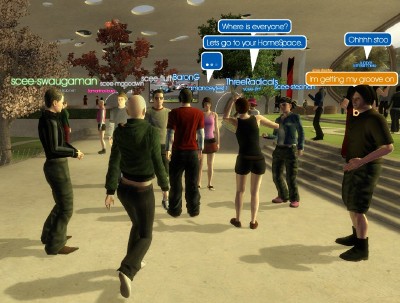 If you weren’t excited about Home, Sony’s Second Life-like virtual world for PS3… well, you should be now. At the company’s E3 press conference, Sony announced some killer new features for Home, including a mobile client, and social networking elements.

The mobile angle is the most intriguing. The way Sony’s Phil Harrison described it was “the touchpoints and community experience of Home are expanding to the mobile environment”. In other words, you won’t be actually wandering around PS3’s virtual world on your handset.

Instead, it’s more about getting stuff from your phone to your Home space – Harrison showed off the facility to take a photo on your mobile, and upload it directly to Home as a picture for your wall.

There’ll also be a social networking website connected to Home, allowing people to blog from within the virtual world. Hmm, although interesting, I’d rather see Home also opening up to existing social networks like Facebook and MySpace. While it’s understandable that Sony wants control of the Home ecosystem for quality reasons, it could do with a bit more Web 2.0 openness.

Sony also showed off the long-rumoured feature allowing you to launch PS3 games from within Home, then be dropped back into the world when you quit the game. It’ll be a jump-off point for playing multiplayer games against the people you meet in Home, but will also work for single-player games.

To get back to my opening paragraph though – I’m seriously excited about Home and its potential, but I do still wonder just how popular it’ll be, and whether PS3 owners will prefer playing games to virtual reality. In a sense, it’s the first big test of whether Second Life style virtuality really can cross over to a mainstream audience.