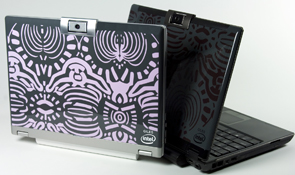 Fancy our fashionably-attired sisters over at Catwalk Queen, getting the scoop on a new laptop range from Intel before us! Alright, so they have been designed by legendary fashion designer Giles Deacon, but that hasn’t stopped us from getting in a strop that they found out before us.

I might’ve said yesterday that I would never own a fashion/technology collaboration, like the new possible Samsung/Armani mobile phone, but I think I’ll have to swallow my words already, less than 24 hours later, as I’d happily buy one of these fashion laptops.

I’m not so sure about ‘Techno Future Primitism’, but these laptops sure are purdy. You’ll be pleased to know that they’re not simply a pretty face too, as the Asus W5 laptops pack a 160GB hard drive, 2GB RAM, Ultra Slim DVD Super-multi DVD/RW drive, Bluetooth 2.0 plus plenty of other features into its 12″ LCD screen and 1.7kg weight.

And, as you’d expect, it runs Windows Vista. Would’ve thought the British Designer of the Year would be more of a Mac man, but hey, there’d probably be riots if someone tried to cover up their pretty white gloss finish with limited edition patterns. Especially when they’re titled ‘Techno Future Primitism’.

Both models will be priced at around £1,499 and are exclusive to Selfridges. I’m there already, camping outside for ’em as we speak. Now, do I choose the ‘male’ or ‘female’ versions, hmmm…