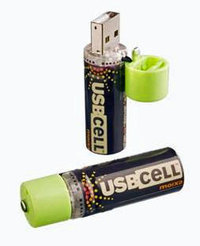 Moixa Energy recently unveiled the USBCELL, a unique solution to the problem of AA batteries – the problem being that whenever you need a couple of AA batteries, all you ever seem to have is a drawer full of half dead ones. And we’ve probably all been there; you’re in the middle of an Xbox Live session when the controller finally stops flashing warning lights at you and goes dead, ten minutes later you’re opening up all your TV and HiFi remotes desperately trying to find a magical combination that will give you enough juice to stop you having to hike it out to the nearest shop for a fresh pack.

Rechargeable batteries help, but then you have to hunt down the charger as well. USBCELL are a much more practical alternative because, as the name implies, they can be recharged using any USB port that you’ve got handy.

Obviously the USBCELL might be a great idea, but it would be let down if the battery performance wasn’t up to the task. I selflessly tested the length of charge on them by setting up a big family Wii sports event and compared them directly against a pair of ordinary Energiser alkaline batteries such as you might buy in bulk because they’re dirt cheap.

The results were impressive – after racking up about five hours of play the USBCELLs had barely broken a sweat where as the Energisers were just beginning to show less than a full charge. It wouldn’t be fair to call the USBCELLs an outright victor, but to be honest I had expected them to fall significantly short of the traditional alkaline alternative, so this was a pleasant surprise.

For the next test I tried the USB cells in an ancient HP photosmart 735 digital camera which has a reputation for eating through cheap alkaline batteries after about 30 pics, or half that if you have the LCD on. This time, the results were nothing short of amazing. I was able to well over 140 photos and a little under 45 minutes of video, with the screen still on, at which point I ran out of space on my 1GB memory card. The USBCELL batteries still had power left in them.

Moixa Energy has included an elasticated strap which keeps the lid attached to the USB connector but also gives some flexibility if you’re squeezing the USBCELLs into a tight set of USB ports. However, because of the size of a USB battery there will still be some slots (mainly those found on the back of home computers) that will be too tightly spaced to fit more than one USBCELL on at the same time. If you have a USB port though, you’ll find there is plenty of space. Alternatively you can even use an ordinary Ni-MH charger – it just takes a little longer.

One other complaint could be the price. A pair costs £10.99, for which you could probably buy a whole ton of cheap disposable alternatives. But the incentive is that you’ll probably never need to buy another replacement and because you’re not through out batteries all the time you can feel like you’re doing your bit for the environment as well.

The USBCELLs aren’t cheap but will probably pay for themselves in the long run and they are environmentally friendly to boot. The performance is way beyond what I would have expected and proves that the USBCELL technology is far from a gimmick, instead providing a seriously practical alternative to having piles of cheap alkaline batteries.

You can buy them now from here.