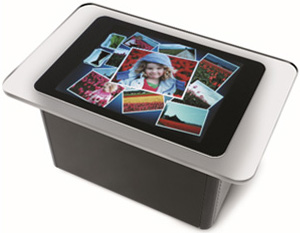 When several of us Tech Digest writers were present at Bill Gates’ keynotes speech at CES in Las Vegas and saw a brief display of what we now know is Surface, which Dave announced earlier this morning, none of us realised it would be released this year.

Heck, we thought we were looking at the sort of space-age technology that comes hand-in-hand with flying cars and bite-sized pills for every meal.

Instead, Surface will be released into the wild (well, commercial wild, anyway) this Winter, where T-Mobile, Starwood Hotels, Harrah’s casinos and gambling-company IGN will have first access to this exciting new way of computing.

As Dave explained earlier, Surface is a table measuring 22″ high, 21″ deep, and 42″ wide, with an internet-connected computer containing an inexpensive Intel chip and a short-throw image projector harnessing Texas Instruments’ digital-light processing technology (seen in everything from TVs to projectors to even smartphones), which shines images onto the 30″ acrylic tabletop display.

Five cameras, located in the base of the table along with the aforementioned products, will help recognise objects you place on the table. Running on Windows Vista, the actual hardware was reportedly easy to assemble, but the five years it took to create Surface was apparently due to the complicated applications harnessing the power of Vista. 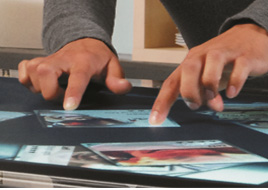 The several videos available on Surface’s already-live website show several key features which are sure to attract attention.

A digital camera placed on the tabletop allows all images from the item to transfer, and from there more than one person can use their fingers to poke and prod the photos, sorting through them, rotating them, even zooming in and out.

Users can then choose an image, turn it into a postcard, and still using a finger, write on the back of the card, then send it via internet to a friend. 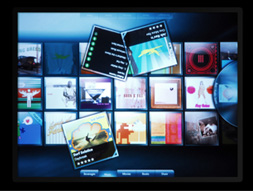 Sharing songs between Zunes will be made even easier, with songs stored on Surface being made transferable to individual Zunes when placed on the tabletop. In the video, no wires were shown, which suggests the songs will be beamed to the MP3-player via Wi-Fi.

Surface is sure to be an incentive to restaurants and bars who wish to ‘do away’ with manpower and harness technology to cut back on costs.

One snippet of a video shows a couple sitting in a bar, able to order their food and drinks through a menu on the tabletop, obviously being sent to a computer in the kitchen. When the time comes to pay the bill, simply placing your bankcard on the table – even several, if you want to pay per person – charges it to your account. 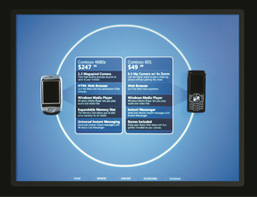 T-Mobile is the first retailer to snap up Microsoft’s inventive new product, with many of their flagship stores due to flaunt the table as a means of flogging phones to consumers.

A mobile phone placed on the table brings up key specs, and when more than one phone is on the table, a comparison is made between the two.

Concierge desks could be made redundant, with guests at Starwood Hotels being able to check-in via Surface, or even bring up vital information about the city.

Looking for a restaurant near by, or the city zoo? Simply use the maps feature, and once your destination is selected, you can place your mobile on the display and slide the contact details over to it, adding the address to your mobile seamlessly. 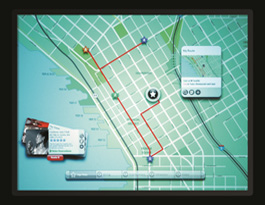 As aforementioned, Surface is initially aimed at businesses in the commercial sector, but Bill Gates presented the tabletop in an entirely different light at CES in January. Then, he showed us how easy it would be to have one as your kitchen table-top, helping you with cooking.

Placing an ingredient such as eggs on the display, Surface would recognise the product and bring up a selection of suitable recipes, and even help you with measurements, possibly weighing the said ingredient. Back then, he claimed this technology would be in everyone’s homes within five years, but it looks like it may well be sooner than that, with yesterday’s announcement. 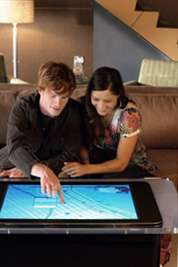 Obviously at a cost of between £5,000 – £10,000, Surface won’t be a viable option for personal use, even for the most diehard Microsoft fanatics.

However, as with every product, the cost will lower dramatically over the years, and we may well find that this is the way forward in regards to home computing, not just for commercial use.

With everything going touch-screen now, including Apple’s hyped-up iPhone which was announced at the Macworld Expo on the same day as the big ‘Soft’s own touchscreen product, the novelty will soon wear off tactile objects and prices will fall.

I for one am looking forward to the day when I can place my cup of tea on my Surface coffee table and then mop up the over-spill!

One thought on “Microsoft's Surface: what it does, who it's for, and why we should lust after one”