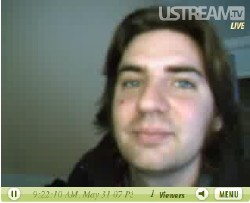 In the week that Big Brother’s latest series kicks off here in the UK, there are probably 873 media commentators already wheeling out Andy Warhol’s ‘Famous for 15 minutes’ maxim, so I won’t labour the point. However, people always assume that there has to be Someone Else making us famous for that quarter of an hour – usually a broadcaster.

The rise of YouTube, MySpace and the Web 2.0 crowd has already disproved that though: as long as you’re half-decent at miming to pop songs, beating up tramps, or taking your clothes off (and ideally all three at once), you can be famous for as long as people keep passing on your link.

YouTube involves recorded video clips, naturally. But the next stage is live webcasting – something that in the past required enough technical know-how to put off casual web users. Not any more. Sites like Ustream.tv and BlogTV are the next step for the YouTube generation. The question is, will anyone be watching them?

I’ve spent a bit of time poking around both sites. The idea is simple: you plug a webcam into your computer, sign up, and then broadcast your show via a whizzy Flash-based interface, without needing to download a dedicated application or rent a server.

In theory, it works smoothly. The signup process is fast, and these sites are built around making it as quick as possible for you to start broadcasting (for example, Ustream’s prominent ‘Create A New Quick Show’ button). After a bit of jiggery-pokery getting Flash to receive video from my FireWire webcam, there I was, broadcasting to the world. BlogTV proved similarly easy to get up and running with. 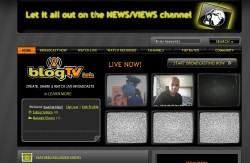 But now what? In both cases, I was now broadcasting to 0 viewers (admittedly, that’s not far off the ratings for some digital channels). There I was in my home office, with a furrowed brow and hair that could do with a wash – who would want to watch? And it’s this question that anyone using these services needs to answer before going live.

In my case, I showed my month-old baby off to some friends, and then ran out of ideas, so just left it running while I did my normal work. I’m not alone either: there are plenty of Ustream.tv feeds that are basically geeky blokes working at their desks, and occasionally waving at their cam when they notice someone has logged on.

What’ll be interesting will be when people with Big Ideas get onto these services. Justin.tv is a great example of an individual who’s running with the idea of 24-hour personal broadcasting – albeit with plenty more technical wizardry than you’d need on Ustream or BlogTV.

But judging by the stuff that’s risen to the top on YouTube, there are plenty of web users who could broadcast up a storm on these services. Some questions remain – I wonder how long I could broadcast on something like Ustream before my ISP gets arsey with me for bandwidth – but this summer I’ll be shunning the rolling Big Brother feeds in favour of looking for some fresh ideas online.