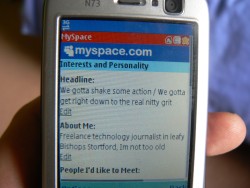 Dave wrote earlier about the fact that Vodafone has launched a MySpace WAP site on its Vodafone Live portal, in advance of a downloadable application coming later in the summer.

Since it’s part of an exclusive deal, for now this is the only way us Brits will be able to access MySpace on our phones.

Yet before I even get to the site itself, there’s one big fat problem staring me in the face. Vodafone wants me to pay £1.50 a month to access the site. £1.50. To use a WAP site for a social networking service that’s free to use on a PC. That’s crazy talk.

The notion that us punters will pay extra for stuff because it’s mobile isn’t new – compare your mobile operator’s full-track music downloads with iTunes – but as a MySpace user, Vodafone has lost me the minute they ask me to pay for it.

Especially considering that rival social network Facebook has recently launched a fine WAP site that’s not only free, but is accessible whatever operator you’re on.

The MySpace site itself is pretty good, of course. You can edit your profile, read your comments, check out your friends’ profiles and send them messages, check your own messages, write blog posts, and search for users. The design is clean, and the pages load relatively quickly, so it’s tickety boo on that score.

But still, it’s not £1.50 a month tickety boo, I’m afraid. At a time when mobile advertising is said to be The Next Big Thing, why is Vodafone trying to make me pay to access the MySpace Mobile site, rather than stick some ads or sponsorships in there to cover the costs of me using it?

Maybe the application – when it comes out – will be worth paying for. I might consider it, if it made uploading photos from my phone easy, and let me stream music from MySpace to my handset when browsing band profiles.

But charging for a WAP site? It’s bonkers.

Without wishing to join the ‘MySpace is dead, long live Facebook’ bandwagon, the latter’s decision to quietly launch a simple, effective WAP site free of any exclusivity nonsense or charging shows a much greater understanding of how people will want to access social networking services from their phones.

One thought on “Charging to access MySpace's WAP site? Is Vodafone crazy?”