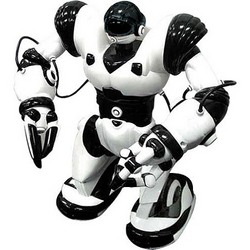 Looks like the Transformers have competition in the Hollywood robot wars. Everybody’s favourite toy robot, Robosapien, is transferring to the big-screen, courtesy of a deal between his maker Wowwee and Arad Productions.

Robosapien: The Movie is expected to be released sometime in 2009, although no details about the film have been revealed other than it’ll be a CGI movie. Hopefully there’ll be at least one scene where Robosapien has to fight off 17 razor-toothed AIBOs in a robo-homage to King Kong.

Arad boss Avi Arad used to be the CEO and chairman of Marvel Studios, so has form producing flicks like Spider-Man 2 and 3, X-Men: The Last Stand, Ghost Rider and Fantastic Four – ironic, considering that Robosapien recently got a Spider-Man themed revamp.

For now, the only Robosapien movie action worth watching is our interview with his creator Dr Mark Tilden, but we’re already looking forward to his big-screen debut. And since it’s not for a couple of years, there’s plenty of time for the Oscars bigwigs to invent a new ‘Best Robot’ category…