Now, the extent of my car knowledge doesn’t go much beyond having a driver’s licence, and watching Top Gear, but even I was excited to be invited to Silverstone Racing Circuit on Tuesday by audio-makers Meridian and those boys in the red, Ferrari. They took us for a day out on the track, where I got several laps in the recently released F599 (wowsers, let me tell you), and got to check out their extremely-tempting F80 collaboration which will mark their 30 years of being in the business. Apparently radio was invented just five miles from the Ferrari HQ in Northern Italy, so it does make sense, no? Read on below the jump for more details (Dave gave you a brief overview yesterday) on the one hi-fi system which is definitely worth shelling out the cowries for… 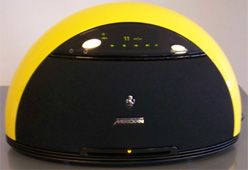 5px; float: left;”/>Admittedly I wasn’t too familiar with the Meridian brand, all I really knew about them was that they produced rather high-end audio systems, so it was great meeting Bob Stuart, one of the two founders of the English brand. As aforementioned, they’ve been popping out the hi-fi systems and speakers for the last 30 years, and as a celebration of their coming-of-age (we all know life doesn’t start until you’re over the first little hill!), they’ve teamed up with Ferrari to produce “their finest piece of work ever”, according to Bob. The story goes that two years ago Meridian decided they wanted to introduce a new category to their already-expansive range, and focus on transportable audio. According to Massimo Fedeli, Managing Director of Ferrari GB, “Ferrari are passionate Meridian owners”, (he even claimed to have bought his first Meridian product back in ’89 as a poorly student), so when they approached them to team up, they were more than happy to comply. Both embodying similar qualities, with their enviable reputations, and shared values towards performance, innovation, and product design, it was a match greater than those you find on Match.com! 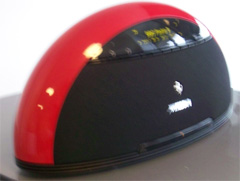 5px; float: right;”/> From their very first loudspeakers launched back in 1977 – the M1, they’ve certainly come a long way. Gone is the clunky style of the ’70s, and in its place is the sleek high-lacquer finish and organic curves of the F80. Billed as being a home entertainment system, there’s a bit more than a CD player under its hood, surprisingly you can hook it up to a TV, insert your favourite Richard Hammond DVD, and enjoy one of the richest audio sensations you can have. After going to a Charlotte Church concert, natch. So, it plays CDs, DVDs, but wait, there’s more! Sadly no steak knives, but it has a DAB/FM/AM tuner plus can be connected to your MP3 player or iPod. There’s just no escaping the claws of Steve Jobs these days, sigh. 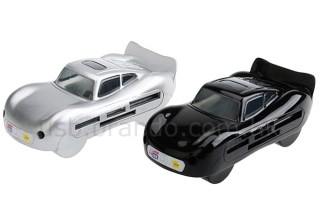 5px; float:left;”/> Featuring 80 watts of oomph (that’s a heck of a lot, I even raised an eyebrow when I heard, it’s that Roger Moore emulating-inducing), and three power amps. Now, obviously onto the more important details – colours. Well, it’s kind of a Ferrari, which is a car, and obviously the most important thing to consider when buying a car is the colour, geez. The standard model comes in five Ferrari colours, those infamous red, yellow, black, white, and silver shades, but if you’re willing to spring for a bit more, you can even get it in a limited edition leather finish. The friends will certainly be impressed with this Ferrari-badged monster hunkering in your lounge. Indeed, the design really is something, as someone commented on the day, the art decco shape “evokes the golden era of wireless”.

The interface was easy to use, with the buttons storing radio station names in the memory, certainly something we shall all appreciate. I really couldn’t fault the F80 in any shape or form with the lengthy play I had with it, and the fact that they’re to release an iPod dock in three months time, perfect for connecting to the system, will certainly be an incentive.

5px; float: right;”/>I’m sure there are many out there who haven’t heard of Meridian, or like me, were aware of them but just not too familiar. Bob Stuart did admit that they are “one of the best kept secrets in the world of performance audience”, and their target audience was “very niche and specific”, but they would eventually like to reach a broader customer base, hence collaborating with Ferrari certainly seems like the right move to make. “Ferrari understand components like noone else on the planet”, he claimed. Hopefully the F80, to be launched at the end of March, will act as a ‘vehicle’ (heh) for the overall Meridian brand.

Call me an ignoramus, but I didn’t actually realise it takes three years from the date of ordering a Ferrari car, to actually receive one – something which Meridian claim will help keep the exclusive nature of the F80 intact. As with any Meridian product, it’s not going to be sold in your local Dixons or Argos, instead they’ll be on offer in 17 outlets across the UK. Now, I can hear you begging for the price there, and this time there’s no need to run away in horror, for the standard model is just £1,495, and the limited edition system coming in at £1,795. That wasn’t so bad, was it?! Now, if only I could get together the cash for an F80 and one of those F599 beasts for my (invisible) garage.