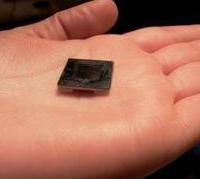 While we’ve seen slight improvements in battery life since they were invented over a hundred years ago, with the introduction of advanced alkaline, rechargeable lithium-ion, rechargeable Ni-MH, and now the recent Rapid-Charge type, the extension still has us replacing them a lot more often than we’re pleased with. However, the new Nano-battery prototype has a shelf-life of 20 years, and is silicon based, so it can be incorporated straight into our tech. In addition to driving down price, reducing waste, consuming less juice, and giving us mobiles that we can talk on until we’re hoarse (or laptops we can type on until we’re sore) it should also put an end to those pesky overheats which result in the occasional exploding battery. [GT]