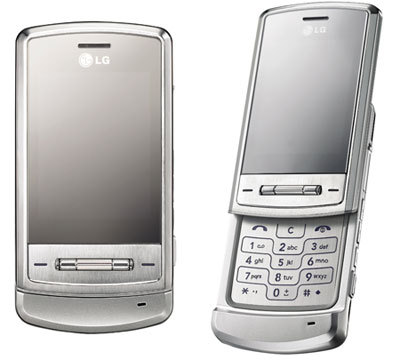 As we predicted last month, LG has just launched its Shine handset in the UK – and you can head off to your local dealer and pick one up straight away.

Shine (also known as the KE970) is the latest handset in LG’s premium Black Label series. And the premium aspect is very much about the looks – a full-metal bodied (and very thin) slider phone. Saying that, the specification isn’t bad either. Shine features a 2.2-inch reflective screen – slide it open for the brushed metal keyboard with the keys that (according to LG) are “bathed in a cool blue light”.

The GPRS/EDGE handset also has a Schneider Kreuznach 2 megapixel camera with auto focus, music player with MP3, WAV and ACC++ compatibility, Bluetooth and USB connectivity plus a microSD slot to expand the memory.

It’s shifted more than 200,000 units in Korea since its November launch – and it will probably shift a good number in the UK too. Priced from free dependent on your contract.