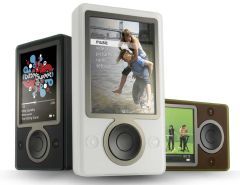 Some Apple fans are having a field day right now, as reports surface of the Zune’s screen cracking due to it being left on charge overnight.

Engadget reports that “Our tipster’s friend conjectures that the lithium ion battery — which resides right behind the top half of the Zune’s screen — is expanding from overheating and putting too much pressure on the screen, causing it to crack.”

Apparently, Microsoft have received ‘numerous reports’ of this, though it’s hard to corroborate the story.

Naturally some Mac sites are having lots of fun with this, particularly after the huge media frenzy over iPod nano screens cracking.

Nothing official from Microsoft yet. If these incidents have indeed happened, then it’s a shame that the Zune appears not to have some sort of charging cut off when a battery has been fully charged. It does sound like a design flaw. We’ll see.

One thought on “Forget iPod woes: now Zune screens crack too, when overcharged”