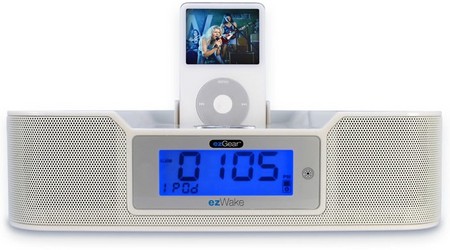 ezGear has announced the ezWake Alarm Clock specifically designed for the iPod. Not surprisingly, it’s another speaker dock with clock.

This one features a bright blue LED display with dimmer, easy to use controls, and a wireless remote control.

It works with all models of iPod, has a built-in battery for time backup, and the LCD displays time, mode, alarm, radio station, and iPod and sleep icons. The alarm can be set to iPod, radio, buzzer, or an external audio source.

According to ezGear, in a blind comparison test between the ezWake and the iHome system, 80% said they preferred the sound of the ezWake, saying it was clearer and had better treble and bass separation.

It comes in black or white, and will be available from mid-January, priced $99.99. International availability to be confirmed.

One thought on “Macworld 2007: EzWake Alarm Clock for iPod”