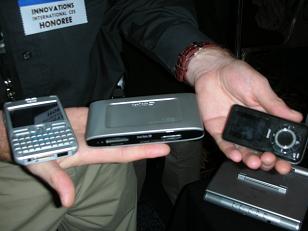 SanDisk’s V-mate was actually first announced back at IFA last year and it’s European launch was really a bit of an understated affair. However, although SanDisk is strongly rumoured to be putting some really exciting kit on display at its proper booth, the V-mate was really all it had on show at today’s unveiled session. Normally this wouldn’t really have merited a mention, but as I was chatting to the rep I noticed an interesting new feature in the menu – Wii compatibility.

When you chose the recording format, it looks like we’ll soon be able to record video straight to a memory card and then play it back using the Wii’s memory card reader. Current V-Mate owners are also in luck to because adding this functionality only requires a firmware upgrade, not a whole new unit.

For those who haven’t seen the V-mate before, it is basically a video recorder that connects up to any A/V device with a composite output and records straight to memory cards (SD, MMC, MMCplus MMCmobile, SDHC, MiniSDHC, MicroSDHC, Memory Stick PRO, Memory Stick Duo and Memory Stick PRO Duo). Because of its wide range of format support and recording styles, it works with a very large number of portable devices such as the Nokia handset and teh SanDisk sansa player in the picture, and apparently the Nintendo Wii also soon be able to join in, which is pretty good.