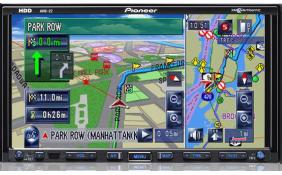 Sometimes I wonder whether the quality of my driving could, purely in theory of course, be adversely affected by going on an eight hour long Grand Theft Auto binge and then leaping straight in to my car to beat on some ‘hos pop down to Sainsbury’s. Certainly most modern GPS devices do little to remind me that I’m actually operating half a ton of glass and steel in a environment where illegal activities seldom have thrilling and amusing consequences. However, Pioneer’s latest GPS system looks very much like it is turning the in-car environment into something even more like a virtual world – it is the first product to use the new Tele Atlas MultiNet database, which delivers “fresh, rich and comprehensive digital maps of North America” (hopefully Europe will follow on soon) and basically looks very much like you’re driving through Sim City.

In addition, the AVIC-Z2 offers entertainment options including an MP3 music library and an integrated DVD player and connectivity to other devices including iPods and Bluetooth enabled phones. You can store digital content on the internal 10GB hard drive.

In acknowledgment of the fact that people generally fall prey to the temptation to play with their GPS gizmos whilst they’re driving along, Pioneer has sensibly included an advanced voice recognition system, which will simply let you shout your commands rather than taking your hands of the wheel to play with the device while on the move.

For other functions, the 7” LCD screen has a touch screen controls that let you flick between navigation and your entertainment content.

The AVIC-Z2 has a suggested price of $2200 and will arrive at retailers in April 2007. No word on UK pricing or availability.