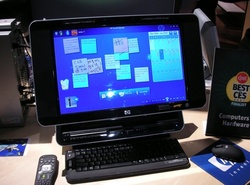 HP has unveiled a new concept PC for home users in the form of the TouchSmart IQ770. It is clearly designed with multiple users and a family environment in mind: its custom SmartCenter software acts as a sort of home page with organisational tools that make use of the large 19″ touchscreen. You can leave notes for on SmartCalendar – a sort of fridgedoor like environment – and you can write them simply by running your fingers across the screen (there’s also a stylus secerted in the top).

The design looks a bit funky as the screen rotates, raises and lowers to let shorter/younger uses get easier access. It doen’t fold away exactly, but it can be tucked back slightly to keep it out of the way. The wireless keyboard can also slide in underneath into its own slot. At the rear there is a space designed specifically for compact HP PhotoSmart photo printers and the position there means that printed pics slide out of the front. Adapted PhotoSmart software is also aimed to resemble to an in-store photo booth.

Like absolutely everything else at CES, it is running Windows Vista backed up by a wealth of pretty heft specs: it is powered by an AMD Turion 64 X2 Dual-Core TL-52 and 2GB of RAM, for storage there’s a 320GB hard drive and Slot-loading SuperMulti DVD burner. Graphics are handled by an NVIDIA GeForce Go 7600 graphics card with 256MB dedicated video memory and there’s an integrated 1.3-megapixel HP WebCam with built-in array microphone. Phew. You also get NTSC TV tuner and over-the-air ATSC high-definition television tuner.

The price is set to be $1,799 – fairly hefty but not too bad given the specs; however, I’m pretty sure the annoying tendency for companies to go for a 1:1 conversion from Dollars to Pounds will make turn into a real premium piece of kit.