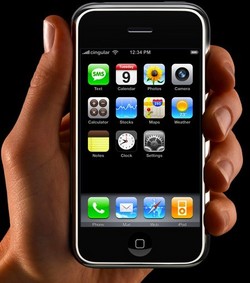 So, Apple announced its ‘fiscal first quarter’ results yesterday for the last three months of 2006. The key news was that the company shifted over 21 million iPods, which is 50% up on the same period in 2005. In the US, this made up 72% of the digital music player market, while Apple reckons it now accounts for more than 85% of the legal music downloads.

However, the company also talked iPhone, saying it wants to sell 10 million of the handsets during 2008, and said that the reason the iPhone isn’t 3G is because 2.5G networks are more widespread in the US than 3G. On behalf of all Europeans who are keen to get an iPhone, cheers for that Apple.

However, the company did say it will “be where the technology is over time”, which cynics may suggest means a revamped 3G version a few months after millions of people have splashed out on the first-generation version.

Oh, and Apple had stern words for Cisco, which is taking it to court over the iPhone trademark. “We think the Cisco trademark is silly. We believe Cisco’s US trademark registration is tenuous at best.” Oof!

Other stats from the results and subsequent conference call: Apple sold over 1.6 million Macs in the last three months of 2006, thanks to strong sales of laptops, particularly the MacBook Pro. Apparently Apple was pleasantly surprised by the 1.6 million figure, which was way above its own expectations.

Finally, Apple described its upcoming Apple TV product as the DVD player of the 21st century, and said there are now over 4 million songs, 350 TV shows and 250 films on the iTunes Store. That’s in the US, obviously. No news on when they’ll finally roll out the telly and movies here in Europe.