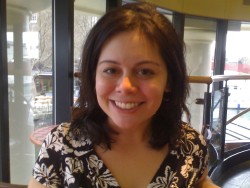 It’s been quite a year for blogosphere-baroness Mena Trott. In October, Six Apart commercially launched Vox, its blogging-cum-social networking service, following a successful beta. And since then, it’s been picking up users at a rapid pace.

“People have really embraced it,” she says. “They’re saying they think blogging is fun again. A lot of people got burned out, because blogging had become a task rather than a pleasure. But we’re winning those people back, along with some of the people who are usually more sceptical and cynical about Six Apart as a company.”

Alongside that, there’s been the launch of Vox’s slick mobile application, several redesigns of the service’s homepage, and more partners. While she was in London last week, I sat down with Mena to chat about those, as well as how she sees Vox competing if the big social networking services ever get their blogging features sorted, and why fostering communities is the next big step for Vox.

One thing that’s been a success for Vox, according to Mena, is that it’s become a community where “if people don’t have anything good to say, they shut up”. Mena’s views on civility and blogging have caused controversy in the past, but she says Vox is the proof that blogging doesn’t have to equate to nastiness.

Interestingly, Mena also says that Vox has been attracting users away from pure social networking services, including That One.

“We’ve seen a lot of people coming from MySpace,” she says. “We assumed the mindset there was so different, they wouldn’t want anything else. But we’ve been surprised by the amount of burnout on MySpace. To see people saying ‘I’m done with this’ and moving on to something else is… interesting.”

Mena reflects the views of Yahoo’s Mecca Ibrahim in saying that Vox users haven’t been friend-collecting, but have preferred to restrict their networks within Vox to friends, family and people whose posts have interested them. This idea of using the social network to restrict who can see your content, rather than expand it, is currently what separates services like Vox and Yahoo 360 from the pure social networking services.

Similar reasons held Six Apart back from making Mena the Vox equivalent of Tom on MySpace – every user’s first friend. “We did talk about that, but right now most people will invite someone as their friend, so that can be your first person,” she says. “Down the road we might have more options, like having editors who round up the best of Vox for music say, and that could work. But right now we’re keeping it simple.”

Since Vox launched, the homepage has undergone several design tweaks, going back and forth between giving more prominence to your contacts’ posts and content, and stuff posted by the rest of the Vox community.

For now, the homepage has settled down to being more of your friends’ stuff, with the other material findable through a dedicated ‘Explore’ function. “It’s there if you want it, and there’s some amazing content out there, but we don’t want to push it at you,” she says.

The other key development was the launch of the Vox Mobile application, which lets users post directly from their mobile phones. I’ve been using it for a month or so now, and it’s slick and easy to use. But does it answer the cynics, who question how important moblogging will be in the future? Mena says it’s a different kind of posting.

“To understand that this is the way people are going to be blogging in the future is incredibly important,” she says. “More people post photos to Vox than they write posts on blogs using it. And the natural behaviour with a phone is to post a picture and say ‘Here!’ rather than write lots about an experience. You can’t write long posts as you’re walking down the street! Going forward, mobile is a huge part of what we do, and we’re going to have some announcements early next year about doing more mobile stuff.”

So what does happen if MySpace and its rivals ever get their blogging acts together? Surely with the sheer size of their user bases, they’ll be able to squash newer startup services like Vox? Obviously, Mena’s answer is no, partly through natural bullishness that Six Apart can compete with anyone coming into the blogging market, through sheer experience. But she thinks blogging won’t be core to the social networking sites in any case.

“I have a hard time thinking people who are so focused on profiles and messageboard comments are going to be able to translate easily into blogging,” she says. “For the most part, that’s not the users we’re going to get. We’ll get more users from services like Blogger, who are using it, aren’t so committed to that service, but see the value of blogging. Also, blogging isn’t the new glamorous thing. It’s been around for a long time, and to many people it’s old news, so I don’t think they’re going to invest in it as much as we are.”

Vox’s content uploading features – think photos and video clips – put it into direct competition with the likes of Flickr and YouTube though. Are they rivals? Mena points out that Six Apart is friendly with Flickr in particular, and sees these sites as partners rather than rivals. But she does still think these services are lacking in certain features.

“We love Flickr, but at the same time, it doesn’t feel like it’s your place,” she says. “It’s a great community, and a great way to see photos quickly, but you won’t ever send someone your Flickr URL and say ‘this is my place’. We feel people will use Flickr because of the community that’s been built, but they’ll want one place where they feel they can direct people. So your Vox URL is where people will find your Flickr photos, your YouTube videos, even posts imported from other blogs. And no other service has fulfilled the need for this one hub.”

So what next for Vox in 2007, apart from the mobile announcements referred to above? Six Apart is focusing strongly on community, and plans to introduce the sort of community groups seen on its Livejournal service, where bloggers around specific locations, hobbies or other interests can post to the same group, creating a community space.

Mena says Six Apart is also signing up more partners for Vox on the content side, and generally tweaking the service, adding new graphical themes and so on. But simplicity and ease of use will remain paramount.

“We still want it to be easy,” she says. “We don’t want to become a service that’s just for elite tech people. It’s always a struggle, because people ask for more features. We have power user services, so we don’t need to have another one. We’re always reining it in so we don’t get feature overkill.”

More generally, Six Apart has recently restructured with two distinct divisions: Business Professional (this covers the Typepad and Movable Type blogging services) and Consumer (Vox and Livejournal). But Mena says this isn’t just about working more efficiently. She sees a clear fork ahead between personal and professional blogging, which will include redefining the general population’s preconceptions of what blogging actually is.

“Blogging is a loaded word,” she says. “People have all these preconceptions, that it’s about people with a lot of free time being vocal and obnoxious. We see blogging as just like using email. If you say you send emails out, people don’t have preconceptions about what you’re doing. Sometimes it’s a mailing list, sometimes corporate communications, and sometimes you’re emailing friends or family. We want the same to be true of blogging, so it becomes just a communication tool to do certain things.”

Finally, does Mena feel lumped in with the whole Web 2.0 bubble? After all, if you define a Web 2.0 service as something that gets better when a lot of people are using it, and which works together with other Web 2.0 services and APIs, then Vox certainly counts. But Mena says there are other reasons why Six Apart feels separate from the Web 2.0 hype.

“We’ve been around for five years, and we have revenues and a business model!” she says. “Most people don’t think of us as a company that’s going to flip, as in get consumed by Yahoo or Google. Yes, we feel what we’re doing is part of the next-generation of what the Web is, but we never call ourselves a Web 2.0 company. Six Apart is this old horse… well, we’re still a fast horse! But we’re going to be around for a while…”