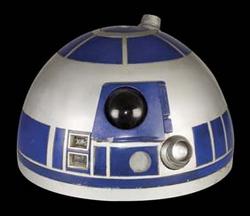 Okay, so this auction might only appeal to Very Small Men, but it’s still pretty cool. Bayraider has found the ‘hero dome’ worn by R2-D2 actor Kenny Baker on eBay, and it’s still got the original fibre-optics and holoeyes intact.

It was used in the filming of Return Of The Jedi AND The Phantom Menace, and was due to be scrapped before being rescued by a passing Elstree Studios employee.

Also today on Bayraider: a charity auction giving you the chance to break the Fastest Furniture Land Speed world record by driving a sofa at 100mph, and a scary rubber stage costume nicked from the band GWAR.