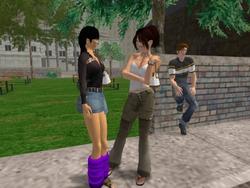 Is virtual world Second Life really a powerful new way for record companies to promote music, or just a sneaky way to grab column inches for being cutting-edge? This was the topic of a debate last night in central London, organised by digital music consultancy MusicAlly. The great and good of the British music industry gathered to figure out how they can sue the arse off make money from Second Life.

First we got a sparky presentation from Justin Bovington, CEO of Rivers Run Red, which works with record labels and brands within Second Life. First, he had some figures. By the end of next week, Second Life will have more than two million users, 50% of whom have used it in the last 30 days. By the end of 2007, this is predicted to swell to just under nine million, which he said was a conservative estimate.

But the big point is that people are making real money from the virtual world. According to Justin, there are 12,680 businesses making a profit in some way from Second Life, and it generates $600,000 GDP every day. Meanwhile, big brands like Adidas, Philips, 20th Century Fox, MTV, eBay and Philips are spending money to create a presence there. This is big business.

“Second Life is very much about real people living virtual lives,” he said. “We find that when people go in for the first time, they tend to create a wild crazy avatar with blue hair and all that. But over time they tend to mould it to be more like them. This isn’t a game. The relationships you form in there are real relationships.” 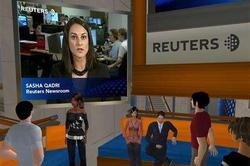 You can’t swing a cat in the British media right now without hitting seven articles about Second Life. Why is there so much hype around it, and is it justified for something that only has two million users? Justin pointed out that the buzz is partly down to the fact that 90% of Second Life users are also voracious internet users – blogging, running Flickr groups and forums, and maintaining MySpace pages. They’re spreading the word.

He also cited the changing news landscape, in that journalists are monitoring sites like Google News and Digg, and because so many of the above group are posting and writing about Second Life, this is being picked up by the mainstream media. Hence the hype. When news agencies like Reuters get involved, as they did this year, that helps.

He also talked about how Second Life has evolved from its early days as an artisan community where people created 3D objects – clothes and items – and then swapped them with other users. “In 2004-05, a value was put on that, and a proper economic model arose,” he said. “You started to see businesses and business culture.” In other words, people were still making these items, but they were selling them, using the in-world currency of Linden dollars. 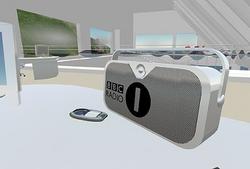 2006 has been the year brands got involved, either by creating events within the world such as Radio 1’s ‘One Big Weekend’ festival, which ran in parallel with the real thing, or by creating shops to sell branded items. Apparently Adidas has sold 21,000 pairs of virtual trainers, for example. Music has been at the forefront of this. Radio 1 attracted 6,000 people to the virtual One Big Weekend, with many apparently “queuing to get in”.

Besides Radio 1, MTV set up an area to promote the 60th anniversary of the Fender Stratocaster, while independent artists like Shelley Poole (ex of Alisha’s Attic) have been using the world to promote their tunes, sending people to buy them on iTunes and Amazon. Meanwhile, some clubs in Second Life attract 4,000-5,000 dancers every weekend.

And then there’s Duran Duran. When they announced plans earlier this year to set up a Second Life presence, it was a huge story. Rivers Run Red is creating it, and apparently it’s been a lengthy process.

“It’s taken 16 people working full-time two and a half months to create the build for them,” he said. “And even around the simple poster sites we’ve launched already, there have been fans of the band coming to talk and form their own community. It’s launching in the New Year now, mainly because our biggest problem has been making the avatars match the band’s own expectations of what they want to look like.”

So how much does it cost for a band to set up a Second Life presence? Obviously, Justin didn’t want to reveal specifics of the Duran Duran project (i.e. it’s costing a bomb), but he did say that to do it right costs around £100,000, although some of Rivers Run Red’s projects cost over a million quid, while others are as small as £4,000.

He counselled against brands who think they can just have a token presence in Second Life and get column inches, because of the negative effects of word of mouth afterwards, and talked about some of the cool technological improvements that are coming into the world – such as the ability to link your virtual and real mobile phones, so that when you receive a text message in the real world, you can answer it from within Second Life.

Meanwhile, Justin also talked about how Second Life is changing, partly as brands get involved, but also as new users come in.

“We did a block party with Reebok, and it was the first time we saw black avatars coming into Second Life,” he said. “This isn’t just a white middle-class geek tool any more. It’s gone way beyond that. The last 900,000 people who’ve come in are mainstream people, and the biggest influence at the moment is urban music.”

So if 2006 was the year brands got into Second Life, what does 2007 hold? “The application is going to go open source,” said Justin. “It’s about Second Life going out into the real world. It’s going to become part of web services, and be on more devices. It’s effectively walking back through the mirror to the real world.”

One thought on “Second Life: "Not just a white middle-class geek tool any more"”