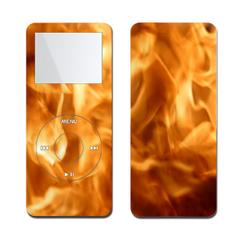 Over Christmas Eve dinner, my sister Jasmine reported that within the first month of owning her iPod Nano (silver, if that matters, and no, she doesn’t use the leather or silicone case that can reputedly cause this problem) it overheated so badly that it blistered her thumb when she picked it up. She was told by Apple to take it back to Wal-Mart, where she bought it, and, “tell them Apple said they have to replace it.” Wal-Mart said they would, then they wouldn’t, then told her to call Apple from a store phone (where she was hassled repeatedly by store staff for “tying up the line”).

Apple eventually admitted she had to send it in for repair, which could take up to a month. (She’d had it less than a month already, remember.) She contacted Wal-Mart management to apologize for involving them in Apple’s runaround, and they immediately offered her a replacement, which she now has. The question is, do we have another overheating battery situation on our hands, and how serious do the injuries have to get before Apple stops fooling around? People tend to carry their Nanos in sensitive areas, after all… like their pockets. Finally, thanks to Wal-Mart for showing Apple definitively has worse customer service.