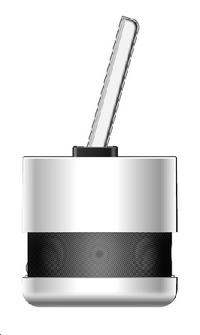 In the wake of the recent Apple Expo, there has a been a fresh rush of new iPod accessories – proof then that despite the best efforts of many highly skilled rivals, the iPod is still very firmly seated in the number one position. The Genesis is thus one of the latest entrants into the iPod speaker dock market, and like the many, many rivals out there, it draws inspiration from the iconic design, adding its own twist.

QDOS’ device is a cylindrical shape that expands to reveal the speakers and controls, and, more interestingly, a unique four- way speaker design that provides a 360 degree sound field. Measuring only 115mm in diameter and 85mm in height when closed and 125mm in height when open, it also comes with a carry case, giving it good potential for outdoor use.

The Genesis is certainly one of the more unique speaker docks out there. Furthermore, the four-way speaker system does make a lot of sense when you think about it and is pretty much ideal for lounging around outside with your friends, especially thanks to the battery power and carry case. But even when used inside, on a coffee table for example, it keeps your player close to hand so you can read the screen without getting up, and lets every one sit around enjoying an equal level of sound.

Although it supports every known version of the iPod (except the shuffle), it also has a line-in for other players, computers, etc. It will charge your iPod when you use the power adaptor and has a USB connector as well.

Sound quality is the main issue here. Unfortunately the four 3 Watt speakers aren’t really worth writing home about; there’s little in the way of bass and they will quickly start to distort when turned up to high volumes. That said, however, even when outside I was able to play my music loud enough to hear easily without any ill effects – just don’t expect it to power your beach party or anything. Similarly, the four-way speaker design seems to do away with any real impression of stereo.

The spring mechanism that releases the unit to its fully opened size can also be pretty violent and, were it not for a pretty tight fit around the player itself, could have sent my nano flying clear across the park. Of course you can get around that by a) not putting the player in before pressing the release button or b) not saying “wow, that’s one violent spring mechanism, let’s see how far it will launch the iPod across the park”, because then you’ll just be disappointed.

Available in white or black

I quickly warmed to the Genesis during my time with it; although its sound performance is not its strong point, the interesting four-way speaker system and rugged, concertina (cheers Andy!) design makes it distinctive and suitable for outdoor use. I have been testing the black version but I think unless you have a black iPod, white is probably a better way to go. You can pick one up now from Widget for a quite pricey £89.99

One thought on “Review: QDOS Genesis”