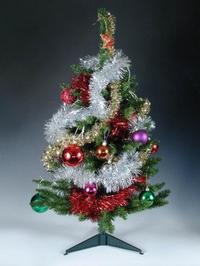 Poor Syd. He was the frontman of Pink Floyd in their heyday (i.e. before Your Dad liked them), but fried his brains so spectacularly on DRUQS that he ended up booted out of the band, and eventually settled down to a reclusive retirement in Cambridge. And then he died earlier this year.

Well, a bunch of his possessions are being auctioned off on eBay, including this artificial Christmas tree (sadly without a crazy diamond dangling from the top), which was found in his upstairs back bedroom. It goes on sale in a live auction later this month.

Also today on Bayraider: four Kiss Mego dolls from 1978, with proper costumes and hair and everything. And Aragorn’s coronation crown from Lord Of The Rings. Well, a replica of it.