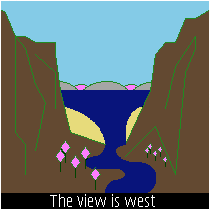 Gamers of a certain age will have fond memories of the humble text adventure, albeit with the odd psychotic flashback to that time they tried to GIVE THE SWORD TO THE FROG but mistyped, and got killed by the troll before they could try again. Or is that just me?

Anyway, text adventures belong to a time before consoles and their new-fangled joypads. And Twin Kingdom Valley was one of the most innovative, blending actual pictures with its text-based adventuring, not to mention proper non-player characters (NPCs) who roamed the in-game world.

Nowadays, of course, text adventures are consigned to history. Or are they? For Twin Kingdom Valley is about to be re-released. On mobile phones.

The game is the work of developer Silicon Magic, which worked closely with the original designer Trevor Hall to create the mobile version, which has its own website. It’s an extended version of the game, with new locations, puzzles and creatures. 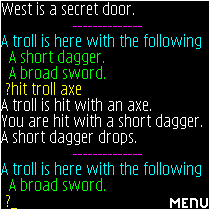 Just a retro curiosity? Not quite. The game includes nifty use of predictive text to help you input commands using your phone’s keypad. It remains to be seen whether today’s young gamers, who grew up with PlayStations, will be tempted by text.

But with a surfeit of mediocre platform games and samey ‘match the colours balls/bricks’ puzzle games, it’s at least a breath of fresh air in the mobile gaming world – and one that reviewers are already heaping praise upon.

At less than £3, it’s certainly worth a try, particularly if you remember it the first time round – if only because it’s a marvellous riposte to pub bores who keep boasting about how great Grand Theft Auto is on their PSPs. Buy it from here.