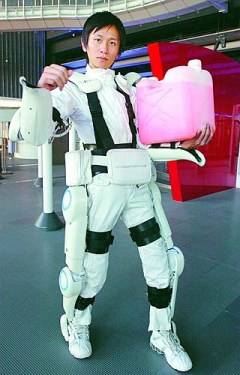 It’s not the oversized Mechwarrior battle gear we think of when we think robot exoskeleton, but then, it’s intended for day-to-day use. The HAL 5 Robotic Suit, by Tsukuba University engineering professor Yoshiyuki Sankai, is a vaguely Tron-looking outfit that is so powerful that it allowed a man to carry a quadriplegic nearly up an entire mountaintop, and is marketed for “walking assistance and rehabilitation, nursing, factory work and disaster relief.” 20 units are slated for production in 2007, at £30,000 each, with 400-500 projected for 2008. Cyberdyne, Sankai’s development company, reports that someone who could normally press 100 kilos would be able to press around 180 kilos if they were wearing the suit, with results that it is expected to show up soon inhospital wards in Tsukuba city.