A database of personal information on millions of Instagram influencers has been discovered online. The database was stored on a server and was not protected by a password, leaving it vulnerable and accessible by anyone. According to US site TechCrunch, which first reported the incident, the database contained more than 49 million records, including private…
21st May 201921st May 2019 Chris Price News

Zynga, the developers behind the massively popular Farmville game, are rumoured to be preparing to break away from Facebook. If reports are to be believed, Zynga are looking to create their own social network in which to house the… 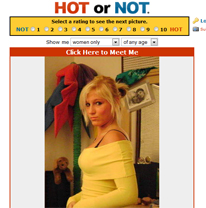 Being whispered from ear to ear today (well, blog to blog) is the rumour that HotOrNot.com, the eight-year old site where you rate the looks of submitted photos of girls, has been sold. Sold for $20 million, believe it or not.

Yes, it appears there’s a lot of money in the business of deciding whether a girl’s jubblies are perky enough for your taste, as the investors are creating a new company based on the website’s name, HotOrNot Media…